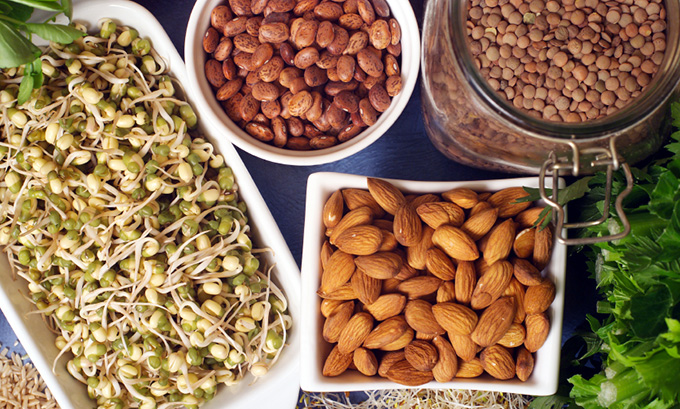 Non-animal protein sources can be used for good health, but realistically it’ll probably be a hard route to take.

The two aspects we’ll look at to understand this better are quantity and quality.

Quantity is actually the biggest roadbump and as we’ll mention later on, quality just compounds the issue.

A fairly agreed upon realistic minimum for protein intake lies somewhere around .5 grams for every pound of bodyweight per day. Now mind you this is a minimum value and is geared more towards not excessively active individuals (walks in the park not counting as excessive activity) who are eating simply for maintenance and general health.

Let’s use a sample couple, Jack and Jill. Jack is a 5′ 9″, 160 lb male while Jill is a 5′ 3″ 110 lb female. Both are in generally healthy weight ranges, have desk jobs, go bowling once a week together, and go for leisure walks when the weather’s gentle.

Using our set minimum, Jack should be getting at least 80 grams of protein per day and Jill needs at least 55 grams.

To get an idea of how this would play out, we’ll look at what they might eat. Being both vegetarians, their main protein sources would be:
-Beans
-Nuts and seeds
-Soy/alternative milk
-Vegetables
-Grain

Beans
Beans, while they have a fair amount of protein per sensible serving, are more dense in carbohydrate. A cup of beans tends to range from 40-50g of carbohydrate (10-15 of which are fiber), while the protein is typically around 10-15g in that cup. Fat is usually virtually absent unless prepared with fats.

Alternative Milk
Soy and alternative milks are somewhere in the range of 14/5/3 grams of carb/protein/fat in a cup. Some are fattier than others, but they’re all generally more dense in carbohydrate. Coconut milk is extremely fatty: a cup contains about 48g with only about 6g of protein and carb.

Grains
There’s a decent range of difference with grains as well. A slice of whole wheat bread: 12g carb, 4g protein, 0g fat. A cup of plain, cooked pasta has 35g of carb with 7g of protein, and a single gram of fat. A wheat dinner roll is around 13g carbohydrate and 2g of protein and fat.

What all this number mumbo-jumbo really comes down to meaning is this: nearly all non-animal protein sources more concentrated in either fat, carb, or both. Because of their density in these other nutrients, and many of them are very fibrous and watery, they fill you up before significant protein is taken in.

Even under the assumption of a balance between all of those categories, it’s a hard goal to fill. A cup of pasta, a cup of broccoli, a handful of nuts or seeds, and a cup of beans with a glass of imitation milk would put the protein total at somewhere around 30-35g on average, and that’s a lot of food!

Jill would need a little less than 2 of these meals to hit her minimum, while Jack needs about 3. If beans seem to always give both of them gas (putting a strain on their relationship), it’s likely they’ll cut those out or cut back on them. If nuts and seeds give them the bubble guts and block normal digestive flow, they’ll get reduced too.

Worst of all, this is under the assumption that the protein taken in is all perfectly used, which sadly isn’t the case.

Vitamin content, mineral content, inflammatory factors, essential fatty acids, and some other components of food are of concern to health but are beyond the scope of this response. For now, we’ll stick to three components: digestive efficiency of different proteins, fiber, and protein quality.

Human digestive efficiency
No process in the body is seamless or perfect, and digestion is no exception. Animal products are absorbed the most efficiently at about 95%. An oddity is that peanut butter actually falls in that range, too. Vegetarians note.

But, save peanut butter, non-animal food isn’t digested as well. Only anywhere from 76% to 86% of those proteins are digested, the rest pass through digestion and down the toilet.
Our well-rounded 30-35g now drops to somewhere in the vicinity of 23-30g.

Protein quality
Protein quality, simply, is how well or not the human body will use protein after it’s digested. We wanted to address this because there’s a lot of back and forth on the protein quality of both animal and non-animal foods.

As silly as it is, despite all the arguments, protein quality is actually pretty irrelevant. If there’s general malnourishment, negative calorie balance with not enough food, and single-source poor proteins, it can start to become an issue.

But, since Jack and Jill live in a modern society with grocery stores, restaurants, and generally plenty of food (and I’m assuming most readers are too), this isn’t a huge concern.

Fiber
Among plenty of other health benefits, fiber is well known for keeping you regular. Of interest to us are three major qualities of fiber:
-Increased fullness
-Slowed gastric emptying/Fuller longer
-Impaired nutrient absorption.

The first two were mentioned earlier but to reiterate: because of them and the water content in the foods, it’s hard to eat a lot of them. People dieting can use this to their advantage as it’ll help control cravings for naughty foods by keeping them full from generally better foods. This works in the opposite direction for this situation, though. Fiber really fights against those trying to fit in adequate dietary protein to a non-animal diet.

As if that weren’t troublesome enough, fiber also blocks some absorption of nutrients. Our concern, protein, is blocked another 5 or so percent with the higher fiber nature of this eating pattern. By the time it’s all said and done, that food which was very filling and hard to stuff down only really brought in a functional 22-28g of protein.
Bringing Jill to need 2 of these meals or a little more to meet her 55g requirement, and Jack to need closer to 3 and a half or 4 of these meals.

Lower protein density in non-animal foods, to begin with, makes it harder to eat enough protein initially. Digestive efficiency of these proteins limits how much of those are even absorbed. Fiber, a stronger point of this diet, not only is part of what makes these foods so hard to eat in high amounts, but even contributes a little bit to blocking protein absorption further.

More or less, while it’s technically possible to get adequate protein on a non-animal diet, don’t expect it to be easy street.