Is our food becoming less nutritious? 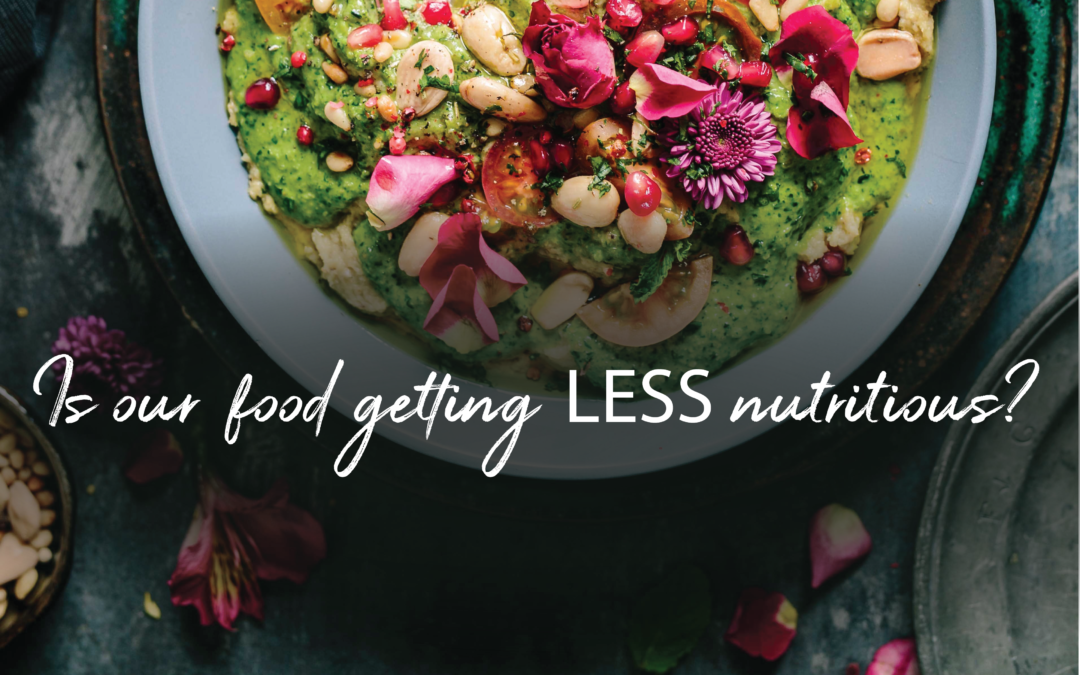 Are the fruits and veggies less nutritious than they were 40 years ago?
The short answer: Yes. Now let’s look at the reasons why.

A study published in 2004 studied 43 common garden crops (carrots, potatoes, corn, etc) and compared how their nutritional value had changed between 1950 and 1999.  They found that protein content had dropped by 6%, Vitamin B2 had dropped by 38%, and Vitamin C dropped by 15%.

After compiling all the data and adjusting for various factors (such as moisture content of the soil), the researchers found that all 43 of the foods measured showed “statistically reliable declines” in 6 critical nutrients:

– Protein, the building block of all muscle and tissue in the human body.

– Calcium, the nutrient required for healthy bones and teeth and the digestion of fats.

– Iron, the mineral that plays a critical role in the production of red blood cells to transport oxygen and nutrients around the body.

– Potassium, the mineral that works with sodium to balance out fluid levels in your body.

– Riboflavin, also known as Vitamin B2, which is critical for reducing the frequency of migraines and headaches.

There have been other studies since then that confirm the average mineral and nutrient contents of the foods we eat are decreasing over time.

What’s causing it?
Most people point to the depletion of nutrient rich soil. However, most farmers use fertilizers and high-quality soils (manure) to ensure their crops have what they need.  Plants wouldn’t grow very well if they couldn’t get the nutrients they need from the soil.

Another possibility is Selective Breeding.
We’ve purposely chosen larger and more durable crops to make the most of our land.
Let’s compare modern vegetables with their origin plant – quite a difference. Corn vs Maize

Now that crops are growing faster, are resistant to pests, are larger, and more lucrative than ever before… would that be taking away from the nutrients our parents saw in similar yields?

Unfortunately, we don’t have an easy way to test this theory as we can’t take a peach from 2018 and hold it next to a peach from 100 years ago and use them both for research.

What scientists are doing is comparing plants, such as weeds, that have not been selectively bred to determine the changes that have naturally occurred over time.  What they found in studying the plants (goldenrod in this study) that are untouched by humans was… a 30% decrease in the protein levels now compared to the goldenrod 100 years ago.  This backed the idea that Selective Breeding is NOT the cause for nutrient decline.

One surprising theory was that Carbon Dioxide played a role in the plant changes.

C02 is like plant food in the air, it enters the plant and makes it into each living cell.  C02 increases the growth of all plants. Over the last 3 centuries, the level of carbon dioxide has increased a lot, by almost 50%. Some experiments have been conducted, this one called FACE, that have injected more C02 into the area where plant crops are grown. They found that the plants in the areas with more C02 do grow faster but they also have a lower concentration of nutrients.

What does this mean for the future?

By 2050, scientists predict that up to 150 million people in the developing world will be on the verge of protein deficiency due to the decreasing levels of protein in our staple foods.  We aren’t at a crisis point yet. There’s no need to go out and spend your money on bottled of vitamins and minerals – Our current foods do have enough nutrients that you can get what you need from diet alone (as long as it’s well balanced).

Just because fruits and vegetables aren’t as healthy as they used to be doesn’t mean we should avoid them. “Vegetables are extraordinarily rich in nutrients and beneficial phytochemicals. They are still there, and vegetables and fruits are our best sources for these.”

BUT! This may be having an effect on our obesity epidemic.  The thinking is: we feel full and satisfied when we’ve had an appropriate amount of protein.  If our foods have less protein and other nutrients, we need to eat more of it for our bodies to be satiated. So more carbohydrates and more fats to receive the same amount of protein may make us fatter.

While all of this is still being studied, there is one thing we do know – the atmosphere is changing our foods and these foods have the power to change our bodies.

We’d love to hear your thoughts on this article – did you know that our food had less nutrients than ever before?
Let us know in the comments below.